Lessons Learned from Headlining the Gothic by Adrienne Osborn

"...Normally I am a complete mess the entire day of the show, as I talk about in my 'Tequila and Ice Cream Diet Secrets' vlog.  This time, I hired an assistant just to help out for the clothing change. It turns out she has a degree in stage management and several years of experience being a theatre stage manager.  She was immediately there to handle any little detail I threw her way. Given that the image above is what my day-of-show checklist looks like, she saved my sanity.

"If you are interested in hiring her, her name is Anastatia Ricketts and here is her website.  I couldn't recommend her more highly.  She is also interested in tour management, and after working with her I have no doubt she would be good at it."

"You can work magic. Thanks!"

"Anastatia is the woman you want on your team. Organized, detailed, patient, and hardworking are just a few of the traits that Anastatia brings to her job. Managing the box office was one of the most stressful points of running a comedy club, and as a manager I never had to worry about the ease of service, or what was going on with Anastatia at the helm. I would hire her again in a second."
-- I.S., Asst GM - Comedy Works, Re: Box Office Manager

"...This was perfect. Thank you so much for helping me out."

"You are great. I really appreciate your help." & "You are magic!"

"...Really enjoyed the [...] meeting and dinner.  It was very well put together. I'm sure you put a great deal of effort into it, and I wanted to be sure and thank you!"

"If you were a super-hero you would be 'The Solver.' You see a problem and you tackle it from every angle, on top, below, and from all four sides. Then you tackle it from inside out just incase that gives you any additional insight. And then you solve that shit. :)" 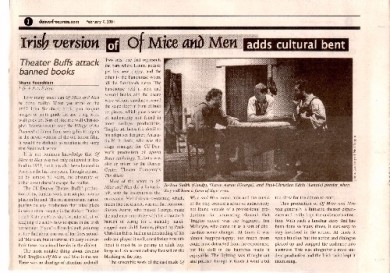 Of Mice and Men

"The most notable thing about director Neil Truglio's Of Mice and Men is the set. There was no shortage of attention to detail. Two sets, one that represents the barn where Lennie goes to pet his new puppy, and the other is the bunkhouse where all the farmhands sleep. The bunkhouse held a table and several bunks and the chairs were wicker; sawdust covered the stage floor in front of both set pieces, which gave a sense of authenticity not found in most college productions. Truglio attributes this detail to his adept set designer, Anastatia N. Ricketts, who was the stage manager for CU-Denver's production of Spoon River Anthology. Ricketts was also an intern for the Denver Center Theatre Company's The Miser."

-- Shane Roeschlein, excerpt of review from The Advocate (February 2001)